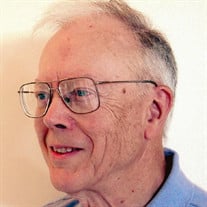 William A. White III (Bill/Billy) entered into Heaven on July 1, 2020. He was born on February 16, 1921 in High Point NC to his parents, William A. White Jr. and Waldeen (Hodgin) White. He grew up in Jamestown NC and was a member of the Friends Meeting in New Garden along with many of his relatives from his family of origin. Early in life, Billy showed great intellect in science and mechanics. He was valedictorian of his senior high school class, graduating a year early. As a teen, Bill had become a licensed amateur (ham) radio operator and had also built his own radio and several television sets. Bill attended Guilford College for two years and later transferred to UNC at Chapel Hill, graduating with a B.S. in Physics. In his early adulthood, he moved to the Washington DC area. He contributed to the Allied efforts in WW II through research at the Naval Research Laboratory (NRL). Bill met his wife, Patricia Reid, while she was also working in DC. They married in 1954 and settled in Prince Georges County, MD. Together they had four children: William (Woody), Rebecca (Becky), John, and Lucy. His sharp mind enhanced America’s Space Flight Program, which had begun at NRL and was later transitioned to the Goddard Space Flight Center in Greenbelt MD where Bill worked for many years. He was project manager for a NASA satellite design team there and contributed most notably to the Orbiting Solar Observatory and the Orbiting Astronomical Observatory. Bill had many hobbies and was gifted as a self-motivated individual. He enjoyed studying solar activity, especially sun spots. He also built his first computer in 1976; he spent many pleasurable hours learning how to program it. He was always interested in cutting-edge technology, and he closely followed trends in science and engineering throughout his lifetime. He provided well for his entire family throughout his adult life. He had helped his parents and grandmother in their later years, and he supplied his own family with much wise guidance and devoted company. He also enriched his family by taking them camping regularly. He and Patricia bought a parcel of land in VA so that there would be a special place for all of them to get away on many weekends for joyful family bonding in God’s creation out-of-doors. He was proficient in exercising his 2nd Amendment rights. He enjoyed using his guns for target practice and always supported his and others’ rights to do so. Unfortunately, he suffered severe hearing loss, beginning in mid-life, due to extended periods of shooting without optimal protection in his youth. Bill treasured his interactions with fellow ham radio operators and loved to attend social gatherings with them. This posed a challenge for his listening abilities, but he had hearing aids and excelled in tweaking them so that he would hear as best he could. He also appreciated conversing on the radio with his ham buddies during times set aside each week. When his hearing impairment became too pronounced for radio dialogue, he had to quit, but he took up doing more yard work at home and traveled more with his wife, which made her happy! Throughout Bill’s life, he relished learning about new subjects and often conversed with those around him about his many interests. His wry sense of humor was a tremendous blessing to those who knew him. Over the years, Bill explored many somewhat inscrutable subjects, such as Quantum Theory and Metaphysics. He also delved into studying different religions and end-time prophecies. Late in life, he started scrutinizing the Bible more closely with its revelations about God, the Creator, and Jesus, God Incarnate. He became enamored with Jesus Christ as Emmanuel, God with us. He had been brought up to believe in the Quaker Friends’ teachings of the Lord giving us, “the Light within”, but Bill also became convinced that he wanted to accept Jesus’ sacrificial death on behalf of mankind, belief in His resurrection, and reliance upon the Holy Spirit. This, he concluded, was his fuller commitment to his truest expression of his faith. Bill passed away peacefully in VA, which had become his adopted home state in the latter quarter of his life. He left us at the great age of ninety-nine, but it still seems too soon. He is greatly missed. Bill is preceded in death by his parents; his wife, Patricia; his son, Woody; a son-in-law, Glenn; and a daughter-in-law, Beth. Also preceding him were: a brother-in-law; a sister-in-law; many aunts and uncles; some of his cousins; and several family pets; as well as most all of his friends and colleagues. Bill is survived by his other children: Becky (Bryan); John (Annick); and Lucy (Winston); his daughter-in-law, Jeanie; and his grandchildren, Jessica and David. Also surviving him are: three sisters-in-law; three brothers-in-law; many other relatives through his marriage to Patricia; several elderly cousins he’s known his whole life; and a handful of “grandpets”. His family would like to express their appreciation for all the many people in the medical profession who have come alongside the family throughout the years: You’ve given us much practical help and guidance into decision-making concerning his health, and our heartfelt thanks go out to you. Thanks are also due to Horne Funeral Home and New Garden Friends Meeting for all of their services during these uncertain times. An outdoor service for family members and the burial of his cremains will take place at the New Garden Friends Cemetery in Greensboro, NC. in late July.

William A. White III (Bill/Billy) entered into Heaven on July 1, 2020. He was born on February 16, 1921 in High Point NC to his parents, William A. White Jr. and Waldeen (Hodgin) White. He grew up in Jamestown NC and was a member of the Friends... View Obituary & Service Information

The family of William A. 'Bill/Billy' White III created this Life Tributes page to make it easy to share your memories.

William A. White III (Bill/Billy) entered into Heaven on July...

Send flowers to the White family.