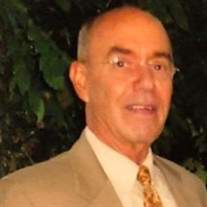 William Brandol ‘Rocky’ West, 77, of Christiansburg, Virginia, went to be with his Lord and Saviour on Thursday, September 10, 2020. Brandol was a graduate of Roanoke College and held a Master’s Degree in Psychology from the University of Virginia. After completing his education, Brandol worked and traveled for many years as an administrator and developer in the healthcare industry. Upon retiring, he returned to the New River Valley to be close to family in the area. Brandol and his wife, Mary, attended Cedar Springs Union Church in Rogers, Virginia. Brandol was preceded in death by his parents, Warren Brandol and Geraldine Hogan West; and brother, Charles Warren West. He is survived by his wife, Mary Sue Walters West; daughter, Erica Dunn (Jon) of Charlotte, NC; son, Corey Brandol West of Charlotte, NC; step-children, Byron Askew (Christina) of Radford, VA, Keith Askew and friend Alicia of Three Rivers, MI; grandchildren, Kane Guilliams and Madden West, both of Charlotte, NC; several step-grandchildren; as well as several great-grandchildren. Graveside Services will be held on Sunday, September 20, 2020, at 1 p.m. at Sunset Cemetery, Christiansburg, with Rev. Neal Turner officiating. In lieu of flowers, please make donations to the Alzheimer’s Association.

William Brandol &#8216;Rocky&#8217; West, 77, of Christiansburg, Virginia, went to be with his Lord and Saviour on Thursday, September 10, 2020. Brandol was a graduate of Roanoke College and held a Master&#8217;s Degree in Psychology from the... View Obituary & Service Information

The family of William Brandol 'Rocky' West created this Life Tributes page to make it easy to share your memories.

Send flowers to the West family.