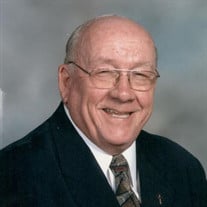 Pastor Virgil Neal McHone, 77, of Shawsville, VA went to be with the Lord surrounded by his family on Friday, February 5, 2021. He was born on September 25, 1943 to the late Paul and Ola Pearl Walls McHone. He was also preceded in death by his sisters, Joyce McHone and Louise Lenze. As a child Virgil spent a year in a Richmond hospital with rheumatic fever and as a result never learned to read or write. His wife Clara later taught him how to read from the Bible. He was saved in 1965 and joined the ministry in 1967. He was ordained as a Baptist minister in 1971 and joined his father in law Pastor Naff as Associate Pastor of Grace and Truth Baptist Church in Roanoke, VA. On December 6, 1992, he accepted the position of Senior Pastor at Seneca Baptist Church where he served for 15 years. Virgil loved visiting those in need, the church bus ministry where he could bring the Word to all children. Currently, he was serving as Pastor of Mountain Top Missions Church in Christiansburg, VA. His hobby was his obsession for fishing. He is survived by his wife of 58 years, Clara McHone; his loving children, Teresa (Michael) Meadows and Richard (Cherie) McHone; grandchildren, Brittney (Lee) McNeill, Morgan (Jon) Watts, Annalyse McHone and Aija McHone; great-grandchildren, Gracelyn, Lydia, and Madilyn; siblings, Bobby (Rita) McHone, Mary (Bruce) Froehler, Sandra Sutphin (Eddie), Sharon (CH) Dooley, and Paula (Bill) Lineberry; his favorite companion, “Fluffy”; along with a host of other family, friends, and church family. The family would like to express a special thank you to Carilion Hospice for the continued care and support during this time and especially to Nurse Becky. The family requests in lieu of flowers, that donations be made to the Shawsville Rescue Squad or to Mountain Top Missions Church. A funeral will be held on Wednesday, February 10, 2021 at 11:00 am in the chapel of Horne Funeral Home with Pastor David McNeill and Pastor Lee McNeill officiating. Graveside services will follow in Blue Ridge Memorial Gardens following with Pastor John Collins Officiating.

Pastor Virgil Neal McHone, 77, of Shawsville, VA went to be with the Lord surrounded by his family on Friday, February 5, 2021. He was born on September 25, 1943 to the late Paul and Ola Pearl Walls McHone. He was also preceded in death by his... View Obituary & Service Information

The family of Pastor Virgil Neal McHone created this Life Tributes page to make it easy to share your memories.

Pastor Virgil Neal McHone, 77, of Shawsville, VA went to be with...

Send flowers to the McHone family.