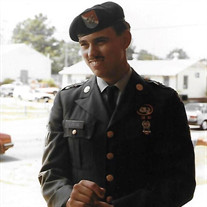 Timothy Dean LaRose, 54, of Christiansburg passed away February 28, 2020. He was a veteran of the United States Army and gave over 30 years of service to his country in military and government contractor capacities. Tim is survived by his wife Melissa LaRose; daughters and sons-in-law Christina and Bryan Barrows and Joy and Jimmy Blankenship; sons Alex, Michael, Joshua, and Dawson LaRose; parents Willard and Geraldine LaRose; sisters and brothers-in-law Stacie and Bill Tucker and Tracie and Trevor Tyler. Tim proudly joined the U.S. Army at the age of 18, with great faith in God and a family legacy of military service. He truly believed it was his calling and a privilege to serve his country. He served in Special Forces with honor and distinction, until he achieved the rank of Chief Warrant Officer 2 (180A) in 2003. Early in his career he served in the 20th SFGA Maryland National Guard. He was a Special Forces Communications Sergeant (18A) and Jumpmaster. Tim spent most of his career in 10th SFGA, with duty stations that included Fort Devens, MA; Fort Carson, CO; DLI in Monterey, CA; Fort Bragg, NC; and Panzer Kaserne in Stuttgart, Germany. Among his many achievements, he served as a Special Forces Combat Diver as well as a Combat Dive Supervisor. He served in many different theatres, including Operation Desert Storm and Operation Provide Comfort. Tim also served many years as a defense contractor with the same dedication and honor in Iraq and Afghanistan. He and his wife, Melissa, were married in 1991, and God blessed them with six wonderful children. His family cherishes the many military stories and memories he shared with them over the years. He was a true patriot in every sense of the word. Everyone who knew him knew of his extraordinary love for his country. His legacy is one of honor and commitment to defending the liberty we enjoy, as well as freedom and democracy around the world. The family will receive friends on Thursday March 5th from 6:00-8:00 pm at Horne Funeral Home. The funeral service will be held Friday March 6th at 2:00 pm at the Horne funeral chapel with Pastor Waters officiating. Interment will be in the Sunset Cemetery in Christiansburg.

Timothy Dean LaRose, 54, of Christiansburg passed away February 28, 2020. He was a veteran of the United States Army and gave over 30 years of service to his country in military and government contractor capacities. Tim is survived by his wife... View Obituary & Service Information

The family of Timothy Dean LaRose created this Life Tributes page to make it easy to share your memories.

Send flowers to the LaRose family.