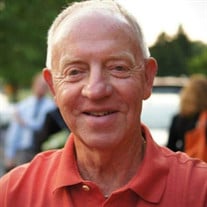 Roger Arnold Bryant, 75, of Christiansburg, Virginia, passed away on April 28, 2021. Roger was dedicated to public service. He was an active member and life member of the Christiansburg Volunteer Rescue Squad for 43 years. He served as the squad’s treasurer for 10 years. He served as the Virginia Association of Volunteer Rescue Squads (VAVRS) District 7 Vice President from 1987-89 and then again in 1990-1991. From 1991-1993, he served as the VAVRS Training Officer. He was granted life membership of the VAVRS. He loved helping the community and built lifelong friendships with his fellow crew members. Upon moving to the NRV, Roger worked as the Patient’s Account Manager at Montgomery Regional Hospital. After many years, Roger moved on to his next adventure. He was a natural born salesman and so many people knew him from his days of selling insurance, selling cars and spending his retirement years selling jewelry at Kays. He loved to talk and never met a stranger. He loved being around people. Roger enjoyed playing his weekly golf game, watching the LA Dodgers or the Pittsburgh Steelers play on TV, cheering on the Virginia Tech Hokies and listening to his favorite 60’s music. The thing Roger did best was being a father, grandfather, and husband. He loved his girls. He was their #1 cheerleader, supporter, chauffeur, and personal shopper. He teased them mercilessly but loved them with a heart as big as the sun. His laughter and big smile will be remembered always. Roger is survived by his daughter, Jennifer Bryant Salyers, and her husband, Kevin Salyers, his granddaughters, Emily Salyers and Sydney Salyers, his brother, Michael Bryant, his nieces Caroline Sodemann, Sabrina Francis, Sara Levesque, Jodie, Jamie, and Celeste Bryant, his nephews Tommy Bryant and William Rawlings, his great nieces and nephews Arden Marsh, Peyton Sodemann, William and Vivian Levesque, and Vincent and Liam Rawlings, and his sisters-in-law, Sue Francis and Doris Rawlings. He is preceded in death by his parents, Arnold and Dollie Bryant of Galax, Virgina, his wife, Pat Bryant, his brother, Dwight, his brothers-in-law, McRay “Buddy” Francis and Art Rawlings. A visitation will be held at Horne Funeral Home in Christiansburg on Sunday, May 2nd from 4-6:00 pm. A private family memorial service will be held at a later date.

Roger Arnold Bryant, 75, of Christiansburg, Virginia, passed away on April 28, 2021. Roger was dedicated to public service. He was an active member and life member of the Christiansburg Volunteer Rescue Squad for 43 years. He served as... View Obituary & Service Information

The family of Roger Arnold Bryant created this Life Tributes page to make it easy to share your memories.

Send flowers to the Bryant family.