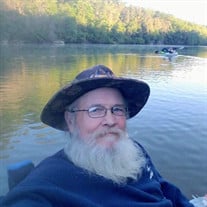 Robert Sherwood Wright, 63, of Pilot, VA, passed away on Thursday, March 4th, 2021 at Duke University Hospital, after a short but fierce battle with Pancreatic Cancer. Sherwood was born on January 7th, 1958 to Barbara (Smith) and Ronald Wright. He was preceded in death by his father, Ronald Wright; his mother, Barbara Smith; and his sister, Tammy Jones. He is survived by his daughters, Tasha Hill (Kevin) and Monika Wright; his grandchildren, Aiyana Dumbaugh and Adrian Limon; and his brothers, Ronnie (Alice), Quintin, Michael "John Brown" and Mark Wright. Sherwood was a force of nature, strong, independent and determined to provide for his family and give them the life he felt they deserved. His daughters meant more to him than anything else in the world, something he often mentioned. He raised his youngest daughter, Monika, as a single parent, working endless hours to make ends meet. He was unendingly proud of Monika and Tasha and always tried his best to support them. He loved spending time with his family, especially most recently, with his newest grandchild, Adrian. Sherwood, aka "Wood", was also a wonderful friend to so many. He was a kind soul, a caretaker and confidante. He would give anything to help another, "the shirt off his back", even if it left him with nothing. Anyone who knew him, loved him. He always left people with a story to tell and a smile on their face. He always felt like he was a lone wolf...if only he knew the true measure of the pack that was following him. Sherwood's native roots ran deep. He was a passionate outdoorsman and could often be found kayaking, camping or hanging out with friends on the river when he wasn’t at home. He found peace in nature. He enjoyed planting and tending his flowers and watching the birds at their feeders. He was a collector of all things old and unique, from architectural salvage to old railroad and sawmill equipment. He always had a new treasure to share. Per Sherwood's request, there will be no funeral or formal services held. His daughters plan to reach out at a later date to organize a gathering of friends and family to truly honor his memory and celebrate his life. So, until then, you’ll probably find him down by the river or catch a glimpse of him feeding the birds. For as long as he is in our hearts, he will always be with us.

The family of Robert Sherwood Wright created this Life Tributes page to make it easy to share your memories.

Robert Sherwood Wright, 63, of Pilot, VA, passed away on Thursday,...

Send flowers to the Wright family.