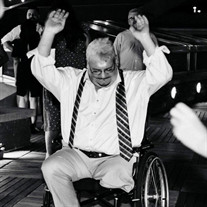 Robert Stuart Noel II, known by most as Bob, of Christiansburg, Virginia, passed away peacefully in his sleep in his home on August 22nd, 2020 at the age of 60. Bob was born on October 25th, 1959 in Clifton Forge to proud parents, Robert and Doris Noel, and grew up in Daleville, Virginia. He graduated from Lord Botetourt High School and went on to attend Virginia Tech, graduating in 1983 with a Bachelors in Communications Studies: Broadcasting Writing and Management. Later in life he continued his education at New River Community College, graduating with a Network and Technical Support Associates degree in 2010. Bob moved to the New River Valley after high school to attend college, but loved the people and area so much he never left. He married and had two children, Stephen and Holly. As a jack of all trades he held many jobs and titles over the years, and was always a staple in the community. Some may remember him as the friendly face of Long John Silvers in the 1980’s. His job title was Trainer of Managers, yet he never hesitated to help customers and provide support at the many locations in the area. Many will recall him as the man who fixed their shoes, an art seemingly long forgotten that he deeply enjoyed, owning and operating Shoe Fixers in the NRV Mall from 1992-1998. He had a passion for electronics and technology long before the average person was computer literate. He used this talent to work as a field service representative and helped individuals, schools, and businesses by fixing their computers. All the while he played piano at many churches throughout his life, finally finding a permanent home at White Memorial Methodist Church of Shawsville, Virginia in 2000. He continued to play piano and direct the choir until he passed. Bob met and overcame many challenges and health issues most will never have to suffer. A reasonably minor surgery he should have walked home from caused him years of pain, subsequent health decline such as diabetes, loss of ability to work full-time, and finally full amputation above the right knee, leaving him wheelchair bound. During this time he continued to raise his two children, play piano at White Memorial, trained and became a lay minister, cared for his many companion animals, and tended to his beautiful garden. Bob will be remembered as a man who did not let pain or strife weigh him down, a man who accomplished more in a wheelchair than many others do with perfectly abled bodies, and a man who kept faith through the hardest of times. Bob was charismatic, compassionate, selfless, and funny. He loved music with every ounce of his being. All of these characteristics shone through the way he lived his life, whether it was weaving a tale of how a shark had bitten off his leg to jest a child or fist pumping and dancing to Bruce Springsteen (to the great embarrassment of his children). His love for piano ran so deeply that once, in a groggy state after one of his numerous surgeries, he played air piano and spoke of how wonderful the song sounded in the concert hall. Bob loved to travel and attend concerts with his brother Roger, and often spoke of the fond memories they made on their many adventures. Bob also loved comics deeply, X-Men being his favorite. He loved painting ceramics and miniature figures. His love for movies was unmatched. He was a jack of all trades and master of many. There wasn’t a single thing you could ask him that he wouldn’t find an answer to and help you with. Because of this trait, he was known by many. Anyone that met him once would remember him for a lifetime. No words can express how much he will be missed. Robert “Bob” Noel II is survived by his parents, Robert and Doris Noel, his son and daughter-in-law Stephen and Kayla Noel, his daughter and her partner Holly Noel and James Walsh, beloved grandson Sam, his brother (and best friend) Roger Noel and sister-in-law Raven Noel, nieces Mia Noel and Madi Noel and fiance Mike Wallace, and very special pets Emmy Lou, Casper, Layla, Evin, and Earl Grey. He is preceded in death by many precious pets including Choxie, Lady, and Macy. In accordance with Bob’s wishes, a memorial celebration of life will be held for family and close friends. Due to health restrictions the service attendance will be limited. In lieu of flowers, please consider a memorial donation to The American Society for the Prevention of Cruelty to Animals (ASPCA), or dropping off a bag of food or other supplies to a local shelter/rescue in his honor. Condolences, photos of Bob, and kind words posted on the tribute wall are greatly appreciated.

Robert Stuart Noel II, known by most as Bob, of Christiansburg, Virginia, passed away peacefully in his sleep in his home on August 22nd, 2020 at the age of 60. Bob was born on October 25th, 1959 in Clifton Forge to proud parents, Robert and... View Obituary & Service Information

The family of Robert Stuart 'Bob' Noel II created this Life Tributes page to make it easy to share your memories.

Robert Stuart Noel II, known by most as Bob, of Christiansburg,...

Send flowers to the Noel family.