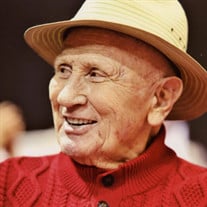 Robert Bernard ‘Red’ Phillips February 17, 1923 – August 31, 2020 R. B. ‘Red’ Phillips, loving son, husband, father, grandfather, friend and neighbor, peacefully passed away at his home with his family present. Red lived a wonderful, compassionate Christian life and he was loved by all who knew him. As an avid sports fan and community activist, he positively affected the lives of many young people. He coached youth baseball for 15 years including taking teams to Colonial Heights for the BIB Tournaments. He was a longtime Kiwanian and supporter of CHS sports. He served his country proudly in the US Marine Corp as well as faithfully serving the UMC throughout his life. Red has entered heaven with a huge grin, giggling as he went. Everyone who has known him was blessed. So now we will carry on the best of him. What a legacy he leaves, what stories to share, and what love to remember. We will hang on to his rainbow as the cloudy moments disappear. The twinkle in his eyes will be there, and the memories of all the years will comfort us. A true man of integrity, his love will live on. Red was preceded in death by his parents, Harley Everett and Lillie Alice; and his loving and devoted wife, Geraldine Miller. He is survived by sons, Robert and Ron Phillips; daughters, Patty Robbins, Peggy Paino; grandchildren, Andy, Wes, and Brad Robbins, Erin Slicer, Kristen Costa, Brent Phillips, Alex and Clay Paino. Also left to mourn his passing are great-grandchildren, Kelsey Robbins, Cassie Phillips, Kendall, Ashlyn, and Hudson Robbins, Landon and Jacob Slicer, Libby and Charlotte Costa, Russell and Jack Phillips; as well as great-great-grandchildren, Collin Justus, Kannon Stump, Brayleigh, and Oliver Phillips. In respecting Red’s wishes, all services were private for the family.

The family of R.B. 'Red' Phillips created this Life Tributes page to make it easy to share your memories.

Send flowers to the Phillips family.