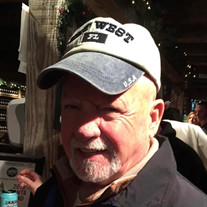 Paul Harvey Shepherd ‘Harvey’, 81, of Dublin, VA went to his heavenly home on Monday, February 15, 2021. Harvey was born on November 24, 1939, to the late Edward McKinley and Helen C. Shepherd. In addition to his parents, he was preceded in death by his sisters, Nita ‘Eunice’ Burk, Conston Spradlin, Louise Sarver, and Ruth Moore; and brothers, Marshall and Archie Shepherd. He is survived by the love of his life – his wife of 62 years, Brenda Shepherd; children, Daniel Shepherd (Virginia), Debbie Pifer (Tim), Chris Shepherd (Mitsy), and Cindy Blankenship (Mike); grandchildren, Chessie Wilf (David), Truly Akers, Danelle Slaughter, Tristi DeBord (fiancé Cody Turman), Michael Blankenship, Christopher Blankenship (Sara), Briana Linkous (Cody), Payton Shepherd; and great-grandchildren, Nick Conner, T.J. Hawkins, Stanley Warden, Davin Akers, Zakk Slaughter, Lukk Slaughter, Braxton Wilf, Blake Wilf, Brielle Wilf, Amiah Miller, Aubrei Stump, Kaylynn Turman, Chloe Blankenship, Braydon Blankenship, Lucas Blankenship, Caden Linkous, Beckham Linkous, as well as another Linkous on the way. Also left to mourn his passing are his brothers, Everett Shepherd (Darlene), Jack Shepherd (Dorothy); and sister, Frances Flores (Marcelo); many nieces and nephews; and his special, faithful four-legged friend and companion, Poppie. Harvey was a big jokester, but was at the same time, a very loving husband and father who had broad shoulders. He had the ability to make both of his daughters feel they were his favorite, and both of them were Daddy’s girls. He retired from the Radford Army & Ammunition Plant after 30+ years of service. After he retired, he worked at the Dublin Wal-Mart as a door greeter for 9 years and during that time drove a school van for the Pulaski County Public Schools. Harvey was very much a people person and loved both of those latter jobs as he enjoyed being around children and making them smile. He loved dancing with his wife Brenda, and enjoyed playing bingo in his spare time. He was an excellent harmonica player and he very much loved shooting pool. The family would like to thank Dr. David Boone for the excellent care he gave to Harvey. Visitation will be Friday, February 19, 2021, from 12-1 p.m. at Horne Funeral Home. Funeral Services will begin at 1 p.m. in the Chapel, with Rev. Everett Shepherd and Pastor John Tibbs officiating. Entombment will follow in Roselawn Memorial Gardens, Christiansburg.

The family of Paul Harvey Shepherd created this Life Tributes page to make it easy to share your memories.

Send flowers to the Shepherd family.