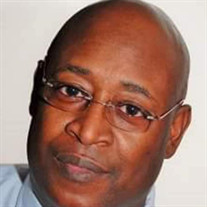 Olen Eugene “Gene” Pearson passed away unexpectedly on Friday, July 16, 2021 in Christiansburg, VA at the age of 56. Eugene was born October 13, 1964 in Austin Texas to Olen & Ada Frances (Gibson) Pearson. He was a 1983 graduate of A. N. McCallum High School as a star basketball player and member of the band, playing trombone and tuba. Eugene was a gifted and talented musician teaching himself to play many other instruments including guitar, keyboard and bass. After graduation, he joined the Army where he was part of the team that captured Noriega in Panama and later became a Trainer at the National Training Center in Ft. Irwin, California. Afterward, he returned to Austin and married his first wife, with whom he had two daughters and one stepdaughter. His love for music extended far beyond high school where he played with well-known local bands focusing on his natural talent as a bass player. He loved his girls and he loved playing his bass guitar. Later in life, Eugene met and married the love of his life, Deborah Bryson in Austin, Texas in 2005. They eventually moved to Virginia with the girls and settled into Christiansburg to be near her family. Eugene worked for Radford Arsenal for ten years as a chief operator. In recent years Eugene poured his heart in to providing, loving and caring for his family. He devoted all of his time caring for his wife until she lost her battle with cancer in 2019. As of recently he dedicated his time and energy in taking care of his brother-in-law, and helping with his grandchildren. Family really meant the world to him, and he displayed that love every single day. He had a passion for cooking, and loved to make lasagna and smoke briskets! Through everything he continued doing the thing he loved, which was playing his bass guitar. He could really “thump” that bass! He would spend countless hours playing for personal pleasure, teaching others his gift, and rehearsing for gigs. He will be remembered for his infamous funny quotes, talent for playing his guitar, and his dedication to everyone he loved and cared for. Eugene is preceded in death by his beloved wife Deborah and his eldest daughter Terrah Nu’man; his parents, Olen and Ada Frances Pearson; grandparents, Edward Gibson and Louiser Limbs; brothers Leonard and Perry Pearson; sister-in-law, Jeanie Christian. Left to cherish his memories are his daughters Alexis Pearson (Jathen Nakamura) and Ariel (Gabrielle) McBride of Austin, TX; Son-in-Law Kareem Nu’man, Sr.; one brother, James Gibson of Austin TX; seven sisters, Barbara (Leon) Walls , Carol Pearson of Austin TX, Tia (Nathan) DeBord of Hutto TX, Leslie Pearson of Aubrey TX, Vanessa Ross of Hutto TX, Veronica (Arnold) Washington of Killeen TX and Wanda Smith of Round Rock TX; five grandchildren: TeJon Nash-Pearson, Kareem Nu’man Jr. and Keshon Nu’man, Ahmya and Kalena Nakamura; two great-granddaughters, Janelle Nash-Pearson and Nova Robinson; one Uncle, Benford (Thelma) Gibson of Austin TX; four Aunts, Edna Price of Round Rock TX, Caroline Limbs and Claudia Limbs of Phoenix, AZ and Angelina Limbs of Austin, TX; Sister-in-Law, Roxie (Allen) Palmer, three Brothers-in-Law, James Christian of Christiansburg, VA; Ronald Ford and David Ford of Austin, TX; and a host of nephews, nieces, cousins and close friends. Visitation will be held at 12PM and a Memorial service at 1PM at Horne Funeral Home, 1300 N. Franklin St. Christiansburg, VA 24073 on August 7th, 2021. A live stream of Olens memorial service can be viewed using the following link: https://www.facebook.com/horne.horne.739326/ Facebook live will start at 12:45 on Saturday, August 7, 2021.

The family of Olen Eugene "Gene" Pearson created this Life Tributes page to make it easy to share your memories.

Send flowers to the Pearson family.