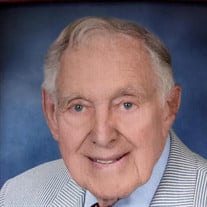 Having achieved his greatest goal of turning 100, Mirto A. Corte passed away on September 16, 2021 in the early morning hours. Born on September 1, 1921 in McDowell County, West Virginia, Mirt graduated from Welch High School and then received a Bachelor of Science degree in Aeronautical Engineering from Tri-State College (Trine University), Angola, IN, in 1942. Upon graduation, he was employed in the Engineering Department of Curtiss-Wright Aircraft Corporation, Columbus OH. There he was a member of the design team for the Navy’s aircraft carrier-based dive bomber SB2C, known as “The Helldiver”, that was used during World War II. While in Columbus, Mirt met his wife of 65 years Dorothy Thompson Corte of Marion, OH. In 1948 he joined his brothers as Vice President of Corte Construction Company and remained there until 1974 when he became President of Blacor Steel Corporation in Bluefield, VA. After retirement, he fulfilled his desire to live near the ocean and golf at will, relocating to Skidaway Island in Savannah, GA. To be closer to family, he moved to Christiansburg, VA in 2001, where he was a member of the community until his death. This includes being a member of the Christiansburg Presbyterian Church and Christiansburg-Blacksburg Rotary Club. While Mirt had many achievements and community contributions, he will be remembered as charismatic and engaging—”he never met a stranger”. He enjoyed meeting new people and was always interested in hearing their stories. He loved Italian food immensely and, at the age of 90, visited Auronzo, Italy, a small town from which his parents emigrated. Mirt attributed his longevity to staying active, whether it was daily walks or dancing to live music with anyone willing, a small glass of vino occasionally, and an incredibly positive outlook on life. Mirt achieved his goal of reaching the centennial birthday and was lucky to have celebrated with family and friends. He was the last surviving member of his family being preceded in death by his mother and father, Mary and Joe Corte, two brothers, Stelio and Ennio Corte, wife, Dorothy Corte, and son-in-law, Thomas Stafford. He is survived by his daughter Carolyn Stafford of Christiansburg, VA. He is also survived by three grandchildren and three great-grandchildren: Todd Stafford and wife Lindsey of Leesburg, VA, Cortney Stafford and partner Sarah Lawrence of Atlanta, GA, and Tyler Stafford of Charlotte, NC. A memorial service to honor and remember Mirt Corte will be held on Saturday, October 2, 2021 at 10:00 am at the Gazebo at Virginia’s Claytor Lake State Park. Should one desire, memorial contributions may be made to Warm Hearth Foundation, Blacksburg, VA or Bluefield University, Bluefield, VA.

Having achieved his greatest goal of turning 100, Mirto A. Corte passed away on September 16, 2021 in the early morning hours. Born on September 1, 1921 in McDowell County, West Virginia, Mirt graduated from Welch High School and then received... View Obituary & Service Information

The family of Mirto A. Corte created this Life Tributes page to make it easy to share your memories.

Having achieved his greatest goal of turning 100, Mirto A. Corte...

Send flowers to the Corte family.