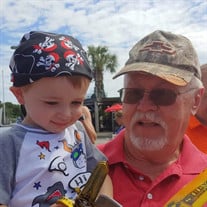 On September 22, 2021 Marvin (Chip) Lee Groseclose, Sr. succumbed to ALS and was called home to heaven to unite with his father, Elwood Ballard Groseclose; his mother, Geneva Taylor Groseclose, and his father-in-law, George Robert Jarels. He is survived by his mother-in-law, Vivian Jarels. He leaves behind to cherish his memory his loving wife, Judy Ann Groseclose and children: Cindy Galliher (husband Chuck), Marvin Lee Groseclose, Jr (wife Kristy), Mark Andrew Groseclose (partner Daniel Sizemore). In addition, he is survived by stepchildren Kevin Lee Albert (wife Lisa) and Byron Courtney Albert. Chip leaves behind two brothers: Robert Groseclose (wife Linda) and Michael Groseclose and three brothers-in-law: Richard Jarels (partner Debbie), Robert Jarels, (wife Peggy), and Kenneth Jarels. Chip’s grandchildren were his pride and joy. If there was a way to bring them into a conversation you would soon get an opportunity to look at them on his phone. He is survived by his granddaughter, Renee Courtney Albert (partner Dewayne Allen) whom he adored and helped raise her and her two children, his great grandchildren: Maverick Albert and Drax (the destroyer) the nickname Chip gave him. The two great grandchildren brought him much joy and laughter. All his grandchildren were special to him and include Chris Albert. Josh Albert (whom he was so proud for following in his footsteps to become an electrician), Ruger Groseclose, Kiley Smith, Cory Galliher, Bryson Albert, Tracey Ferguson and great granddaughter, Chloe Ferguson, and Hanna, Alexis, and Elizabeth Allen. After working over 20 years at Radford Arsenal, he decided to pursue a career as an electrician at New River Community College to become a Master electrician and run his own company, Chip’s Electric. He worked for many years in the New River area and beyond doing a job that he enjoyed immensely and never considered it work. Chip was an avid hunter, loved to fish, enjoyed bingo and slot machines, traveling and camping. His love of animals was great. He leaves behind his donkey, Fiona, his four goats, his artic fox, Nanook, four cats, and his dogs: Bengi, Duke, and Tiffany. A special thank you tp Pastor Leon Alley for always being there and to Intrepid Hospice and their wonderful staff. Special thanks to Marsha Merritt, you always made him smile. A celebration of his life will be held on Sunday, September 26, 2021 at 2:00 pm from the chapel of Horne Funeral Home with Pastor Leaon Alley officiating. The family will receive friends 1 hour prior to the service at Horne Funeral Home and following the service there will be fellowship at his home in Pilot.

On September 22, 2021 Marvin (Chip) Lee Groseclose, Sr. succumbed to ALS and was called home to heaven to unite with his father, Elwood Ballard Groseclose; his mother, Geneva Taylor Groseclose, and his father-in-law, George Robert Jarels. He... View Obituary & Service Information

The family of Marvin (Chip) Lee Groseclose, Sr. created this Life Tributes page to make it easy to share your memories.