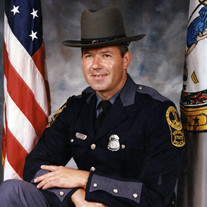 Kenneth Eugene Meredith, of Riner, Virginia, passed away on Wednesday, August 18, 2021. He was 66 years old. Kenneth was born on July 10, 1955, in Radford, Virginia, and was raised in Snowville, Virginia. He played basketball for Auburn High School where he graduated in 1973. On July 14, 1978, he graduated from the Virginia State Police Academy 64th Basic Session; he served as a Virginia State Trooper in Northern Virginia for 34 years, retiring in 2011 as a Master Trooper. On May 9, 1981, he married Lois Rebecca Hoffman in Brentsville, Virginia, where together they raised their family. Kenneth loved the Lord, and he taught his family to do the same. For over 20 years, Kenneth was a faithful member of Hatcher’s Memorial Baptist Church, in Brentsville, Virginia, where he taught Sunday school, sang in the choir, and served as a deacon. After retiring from the Virginia State Police, Kenneth found other ways to stay busy. For several years he worked at Target in Christiansburg. His quick wit and wisdom endeared him to everyone he met. He enjoyed gardening, fishing, and tending chickens. He watched whatever sports were on TV, attended whatever Hokie games he could, and went to the various sporting events of his great nieces and nephews. Kenneth was preceded in death by his parents Cleddie and Winnie (Phillips) Meredith of Snowville. He is survived by his loving and devoted wife of 40 years, Rebecca; his children, Philip and Julie (Grubbs) Meredith of Woodstock, Virginia, Paul and Jessica (Nawrocki) Meredith of Culpeper, Virginia, and Jessica and Chris Pauley of Christiansburg, Virginia; his sisters, Roberta and Lee Teel and Ella Mae Millirons; aunts, Adell Adkins and Loisene Meredith; uncle, Ted Phillips; and six grandchildren, Alora, Whitney, Wesley, Walter, Benjamin, Hannah, and Matthew. Kenneth has many other nieces, nephews, and cousins. He will be greatly missed by those who called him Kenneth, Ken, Kenny, Eugene, Trooper Meredith, Husband, Brother, Dad, Daddy, and Granddaddy. Services will be held at Auburn Baptist Church in Riner, Virginia, where Kenneth was a member. Viewing will be on Monday, August 23, 2021, from 5:00 to 8:00 pm. Funeral service will be held on Tuesday, August 24, 2021 at 11:00 am. Immediately following, a graveside service will be held at Indian Creek Primitive Baptist Church in Willis, Virginia, with a meal to follow.

Kenneth Eugene Meredith, of Riner, Virginia, passed away on Wednesday, August 18, 2021. He was 66 years old. Kenneth was born on July 10, 1955, in Radford, Virginia, and was raised in Snowville, Virginia. He played basketball for Auburn High... View Obituary & Service Information

The family of Kenneth Eugene Meredith created this Life Tributes page to make it easy to share your memories.

Kenneth Eugene Meredith, of Riner, Virginia, passed away on Wednesday,...

Send flowers to the Meredith family.