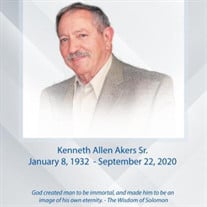 Kenneth Allen Akers, Sr., a native of Christiansburg, VA, passed away at the age of 88 on September 22, 2020, in Port Orange, Florida where he resided. He was born in Floyd, VA on January 8, 1932 and moved to Northern Virginia at age 24, where he raised his family before retiring to Florida. He enlisted in the U.S. Army in 1950 at the age of 18 and served his country honorably in the Korean War. He received the Korean Service Medal with six bronze campaign stars, a Korean Presidential Unit Citation, and other service and campaign medals for his courageous service. He belonged to the American Legion Riders Association, VA Chapter Warrenton Post 72, the Partisans Motorcycle Club, Warrenton, VA, and the Eagles Club, Daytona Beach, FL. He was a passionate Harley-Davidson enthusiast who loved riding and building custom bikes. His motorcycle friends called him “Immortal” which was proudly emblazoned on the back of his leather jacket. He participated in one of the annual bike events to Sturgis, South Dakota. He was initiated into the Painters and Allied Trades International Union, District Council No 51 as a Glazier on June 1, 1959. He retired in 1999 after 40 years of respected construction work throughout Northern Virginia, Maryland, Washington, D.C. and Guam. In the late 1960s he put new glass in the U.S. Capital and First Lady Jacqueline Kennedy took him on a personal tour of the White House. Ken is preceded in death by parents Don and Aletha Akers, his wife Margaret McKinney Akers, brothers Calvin and Alvin Akers, and sisters Ruth and Leona Darlene Akers. Ken is survived by son Kenneth Akers, Jr., (Nancy); daughters Deborah Akers-Cordivano (Vince), Kathy Null (Keith), Dianne Pope (Fred), and Carolyn Jenkins (Ron); aunt Esther Griffith; sister Maybelline Holcomb (late husband Alfred Holcomb); brothers Eugene (Thelma), Leon (Virgie), and Larry (Sharon); grandchildren Josh Null (Erin), Nikki Jenkins, Bradley Akers (Liz), Zach Akers, Kirk Jenkins and Christian Jenkins; six great grandchildren; many nieces and nephews; and his best friend and beloved dog Rigid III. Ken will be remembered and missed for his deep love of family and friends, positive attitude, amazing laughter and wit, funny one-liners and jokes, love of his country, and common sense counsel and support. The viewing will be held at the Horne Funeral Home, 1300 N. Franklin Street, Christiansburg, VA 24037 on Saturday, October 3rd beginning with a private viewing for family from 2:00 to 3:30 and a public viewing from 4:00 - 6:00. Burial with military honors, will be on Sunday, October 4th at 11:00am at the Duncan Cemetery on White Rock Road, Willis, Floyd County, VA.

Kenneth Allen Akers, Sr., a native of Christiansburg, VA, passed away at the age of 88 on September 22, 2020, in Port Orange, Florida where he resided. He was born in Floyd, VA on January 8, 1932 and moved to Northern Virginia at age 24, where... View Obituary & Service Information

Send flowers to the Akers, family.