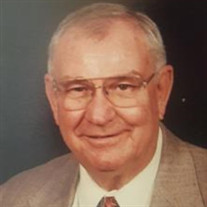 Joseph Conner Draper, ‘Joe,’ 86, of Christiansburg, formerly of Boykins, VA, passed away on Thursday, January 14, 2021. Joe and Lucy married in 1957 and traveled to Germany for a two year Army enlistment where he served as a cryptologist. Upon returning to the United States they settled in Boykins and managed the family farm until he returned to VPI to study agronomy. Joe and Lucy were active members in the community and made many friends in the area through their many social and business relationships. Joe began his professional surveying career in 1965 and became a leader in the growth of the Christiansburg-Blacksburg-Montgomery County community. Joe was a founding partner and President of Draper Aden Associates (DAA) from its inception in 1972 and held that role until he retired in 1997. He also served several terms on the Montgomery County Planning Commission. Over the course of his life, Joe’s quiet leadership, incredible memory and easygoing wisdom oversaw the growth of DAA from five employees in Blacksburg to well over 300 employees spread across eight offices in two states. He was known for his ability to solve problems and mentored many of DAA’s employees. Joe’s business partner Bill Aden and dear friend remarked, “I'm going to miss him terribly, but know he's going to be casting for his favorite bonefish in a better place.“ After an early loss of a close friend, he became an avid fly fisherman and thoroughly enjoyed remote international fishing and shooting trips where he made many lifelong friendships. He was an enthusiastic Golden Hokie, enjoying numerous football games with family and friends. After retirement he enjoyed woodworking projects at Lucy and Joe’s cabin on the Little River in Riner. He was a sharp card counter which enabled him to be a fierce competitor in poker, bridge and other games of chance, all of which he enjoyed. Joe was preceded in death by his parents, Lucian Felton and Kat Draper and his wife of 62 years, Lucille Webb Draper. He is survived by his brother Sonny Draper; daughters, Lynn Rader, Kurdy Biggs and husband John, Susan Silas and husband Greg; grandchildren, Joe Rader, Gwen Harris, Connor Biggs, Kiernin Biggs, Aaron Durrence, Olivia Durrence, Alison Durrence, Meagan Matechak, Will Silas; great-grandchildren, Harmony Rader, Richie Perry, Bryce Harris; devoted friend, Jane Rivers; as well as many nieces and nephews and will be missed by all. Graveside Services will be conducted on Monday, January 18, 2021 at 1:00 PM, with Pastor David Rhudy officiating in Beechwood Cemetery, Boykins, VA. A Celebration of Life will be held later in the year in Christiansburg, VA, when conditions allow. In lieu of flowers, donations can be made to the American Cancer Society or a charity of your choice.

Joseph Conner Draper, &#8216;Joe,&#8217; 86, of Christiansburg, formerly of Boykins, VA, passed away on Thursday, January 14, 2021. Joe and Lucy married in 1957 and traveled to Germany for a two year Army enlistment where he served as a cryptologist.... View Obituary & Service Information

The family of Joseph Conner Draper created this Life Tributes page to make it easy to share your memories.

Send flowers to the Draper family.