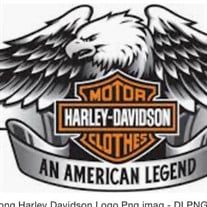 John Scott Miller, of Christiansburg, took his final ride on Tuesday, May 19, 2020 at 10:30 am. Born on February 15, 1973, he is preceded in death by his mother, Judy T. Miller, of Christiansburg; his uncle Lewis Thompson, of Floyd; his aunt and uncle Jean and Franklin Peters, of Elizabethton, TN; and grandparents Hassel and Judith Thompson, also of Floyd. He is survived by daughter Savannah and life partner Christina. Also surviving John are his sister, Jennifer Eggers, of Raleigh, NC; nephew Brandon Eggers, nephew Joshua Eggers, nieces Rachel Eggers and Loren Foldes (husband Dustin), also of Raleigh, NC, as well as numerous cousins in Virginia and Tennessee. His extended family also includes many life-long friends: Ricky Schack, Andy Schack, Freddy Alderman, Frankie Alderman, Wes Young, Shane Lucas, and many others. John’s friendship knew no boundaries, and his generosity extended to nearly everyone he met. His energy, his humor, his smile and his unfailing love will be missed by all who knew him. Due to current restrictions with COVID19 services honoring his memory will be private. The family requests that in lieu of flowers, donations be made in John’s memory to the American Heart Association.

The family of John Scott Miller created this Life Tributes page to make it easy to share your memories.

John Scott Miller, of Christiansburg, took his final ride on...

Send flowers to the Miller family.