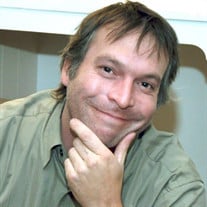 John Stanley Boyd, devoted husband and father, died on Saturday, April 18, 2020 in Christiansburg, VA, at the age of 43. John was born in Asheville, North Carolina on April 6, 1977 to parents, Stanley and Catharine. John and his older sister, Catharine, grew up mostly in North and South Carolina. He attended Spartanburg High School, graduated with a Bachelor's degree in Chemistry from USC Upstate, and worked towards a doctorate in Macromolecular Science and Engineering at Virginia Tech. While studying at Virginia Tech, John met Laura through mutual friends. He quickly won her heart with his wry sense of humor. On July 9, 2011, they were married in a joyous celebration, surrounded by family and friends. Together they welcomed two beautiful daughters into the world, who became the center of their lives. Vivian and Lena are both often described as “daddy’s girls”. Not only do they look just like him, but they also adored being with him. Many happy moments were shared in their little family of four. In recent years, John took pride in serving others through his work at Kroger. He especially found satisfaction in resolving conflicts in thoughtful ways. John loved, more than anything, to be at home with his wife and daughters. He took pleasure in cooking, often elaborate, meals for them and finding other ways to spoil the three loves of his life, “his three girls”. John was a bit of a foodie and had a knack for wisecracking. He loved music and was especially enjoying listening to a set of newly released albums from his favorite group in the last weeks of his life. John liked to go fishing when he found the time. His daughters will surely cherish their memories of fishing with their daddy. He will be deeply missed by his family, his friends, and all who knew him. John is survived by his wife, Laura Boyd; their daughters, Vivian Boyd and Lena Boyd; his father, Stanley Boyd (Donnella); his mother, Catharine Snell (Ron); his sister, Catharine Cox (Billy); his grandmother, Barbara “Grammy” Bisson; and many aunts, uncles, cousins, family, and friends. A drive-in graveside memorial service is planned for Thursday, May 7 at Memorial Gardens of the New River Valley in Blacksburg at 1:00 pm. All who wish to attend may do so and will be able to hear the service from the safety and comfort of their car through their car radio. A drive-through visitation will immediately follow. Visitors will be able to speak to the family from their cars as they exit the service.

John Stanley Boyd, devoted husband and father, died on Saturday, April 18, 2020 in Christiansburg, VA, at the age of 43. John was born in Asheville, North Carolina on April 6, 1977 to parents, Stanley and Catharine. John and his older sister,... View Obituary & Service Information

The family of John Stanley Boyd created this Life Tributes page to make it easy to share your memories.

Send flowers to the Boyd family.