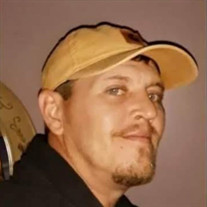 Jason Michael Forester, age 42, died in his hometown of Ypsilanti, Michigan on October 10, 2020. He was born January 8, 1978 to Barbara Snipes and Larry Forester. Jason was a recent resident of Mercer County, West Virginia but his heart spanned across the New River Valley of Virginia where his children and grandchild reside, the mountains of West Virginia and the hills of North Carolina. At the age of 18, Jason met Chrystal Hicks, the love of his life and future wife in Richlands, VA. He and Chrystal married a few years later. While they had homes over the years in Virginia, West Virginia, North Carolina and Michigan, Jason had a special love for the New River Valley where he and Chrystal raised their sons. When he was not working or spending time with family, Jason’s hobbies were fishing and mushroom hunting. He loved the outdoors and was a lifelong Dallas Cowboys fan. He was also an avid movie buff and music lover. He said that music spoke to his soul and he encouraged others to listen to and really understand the lyrics. The other love of his life besides his wife was his beloved dog Gizmo. He always said Gizmo was “the daughter I never had”. He is survived by his wife, Chrystal; sons, Alex and Isaiah both of Christiansburg, VA, and Gavin of Beckley, WV; and by granddaughter, Braylee of Christiansburg, who was his little princess. He is also survived by his siblings, Emily Owens of Statesville, NC, Brandon Wilson of Belleville, MI, and Chris Forester of Lansing, MI; as well as several nieces, nephews, cousins and many friends. He was preceded in death by his father Larry; his maternal grandparents, Gladys and Roy Hinkle of Sun Mine Road, WV, and his paternal grandparents, Sheryl and Faye Forester of Belleville, MI. A celebration of Jason’s life will be held on Sunday, October 18, 2020 at 1 p.m. at Horne Funeral Home in Christiansburg, VA. Visitation will be immediately following the service.

Jason Michael Forester, age 42, died in his hometown of Ypsilanti, Michigan on October 10, 2020. He was born January 8, 1978 to Barbara Snipes and Larry Forester. Jason was a recent resident of Mercer County, West Virginia but his heart spanned... View Obituary & Service Information

The family of Jason Forester created this Life Tributes page to make it easy to share your memories.

Jason Michael Forester, age 42, died in his hometown of Ypsilanti,...

Send flowers to the Forester family.