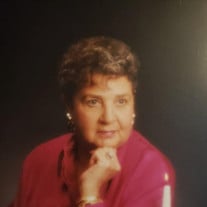 Janye Burgess Galup (September 24, 1930 – September 13, 2021) Janye Dare Galup (Burgess), beloved mother, grandmother, great-grandmother, sister and friend to many, passed away peacefully, September 13, 2021. She was 90 years old. Janye was born in Bluefield, WV on September 24, 1930, the eldest child to the late Claire W. Burgess and Ruby Burgess (Hall). She graduated from Alexander Park High School in Portsmouth, VA in 1947 and attended Radford College, Woman’s Division of Virginia Polytechnic Institute in Radford, VA. She married in 1951. She earned her BA degree in 1975 and MS (Education) degree in 1979 from Herbert H. Lehman College in New York City. Janye was a reading specialist teacher and retired in 2001 after teaching at Western Branch High School (Chesapeake, VA) for more than 23 years. Always a promoter of education, Janye was often heard telling her three children, Mercedes, Alice and Stuart, as well as her students, “I don’t care if you sell apples on the corner, but you better do it with a degree in your hand!” Janye was an active member of the Delta Kappa Gamma Society International “Beta Iota” Chapter, Virginia for 24 years (1986-2010) and was proud to be a member of the Daughters of the American Revolution, D.A.R. for 67 years (1954-2021). After retiring from teaching in 2001, Janye became a “Doggie Mom” to Boo, her beloved poodle. In January 2011, Janye and Boo moved from Chesapeake, VA to Fort Lauderdale, Fl to her “Independent Living” apartment at Independence Hall. While in Florida, she was featured in the local news, performed in holiday plays and danced her way into the hearts of many at the “Senior” Balls she attended. Throughout her life, Janye loved the theatre and music, international travel and embarked on many family cruise adventures. During her lifetime, she touched the lives of hundreds of students, her family and many friends. She will be fondly remembered by all those who knew and loved her. She was predeceased by her daughter, Alice Riley (Galup) and brother, Huey Burgess. She is survived by her daughter, Mercedes Bilow and husband Jack; her son, Stuart D. Galup and wife Dawn; her brother, Jim Burgess and wife Butch; her sister-n-law, Sandy Burgess; her grandchildren, Alexander Vidan, Christen Todd (Galup), Jacqueline Troutman (Riley) and Nicholas Riley; her five great-grandchildren; and many nieces and nephews. In lieu of flowers, memorial donations may be made to Delta Kappa Gamma International as follows: please earmark Scholarship Funds By check - DKG International Educators Foundation, 416 W 12th St., Austin, TX 78701; By credit card - www.DKG.org Services and Celebration of Life will be held in Virginia at a future date. Condolences may be offered to the family at www.hornefuneralservice.com

The family of Janye Dare Galup (Burgess) created this Life Tributes page to make it easy to share your memories.