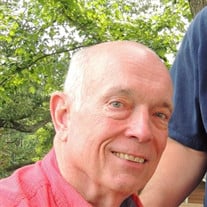 James (Jim) Courtland Stewart, of Christiansburg, VA, died Saturday, August 15, 2020. He was born in 1942 to Charles and Elizabeth Stewart. He grew up in Roxboro, NC with his older siblings Charlie and Eleanor. Jim played football at Roxboro High School before attending Frederick College. He earned his bachelor’s degree at the University of North Carolina at Chapel Hill, served in the military reserves, and later completed his master’s degree at Virginia Tech. Jim married Diana Gorman in 1965. They met when Jim was Diana’s waiter at a restaurant. During their first date, they discovered their birthdays were two days apart, and from that moment on decided to celebrate “their” birthday on January 3. Together they raised three children, their daughter Beth and their twin sons Jamie and Court. Jim was a member of St. Paul United Methodist Church in Christiansburg for nearly 40 years. He loved growing tomatoes, watching the Tarheels, playing cards, eating spaghetti, and most of all spending time with his family. Nothing was more important than taking care of his family. After retirement, he spent many days looking after his baby granddaughter. He cared deeply about his community and always looked for ways to help other people. He was active in many community organizations including the board of Radford Community Hospital/Carilion New River Valley Medical Center, the Christiansburg Board of Zoning Appeals, the finance committee at St. Paul UMC, the board of National Bank, the Wilderness Trail Festival, and many others. Jim was predeceased by his wife Diana; his son Court; his parents; and his siblings. He is survived by his son Jamie Stewart; his daughter Beth and son-in-law Robert Johnson; his granddaughter Julia Johnson; many relatives and friends; and his dog Daisy. In lieu of flowers, please consider making a donation to the Montgomery County Emergency Assistance Program or the Christiansburg Rescue Squad. A visitation will be held on Saturday, August 22, 2020, from noon until 2 p.m. on the back porch at Horne Funeral Home in Christiansburg. Due to COVID-19 concerns, the family asks that masks be worn and physical distancing be observed. Burial services will be private.

James (Jim) Courtland Stewart, of Christiansburg, VA, died Saturday, August 15, 2020. He was born in 1942 to Charles and Elizabeth Stewart. He grew up in Roxboro, NC with his older siblings Charlie and Eleanor. Jim played football at Roxboro... View Obituary & Service Information

The family of James 'Jim' Courtland Stewart created this Life Tributes page to make it easy to share your memories.

Send flowers to the Stewart family.