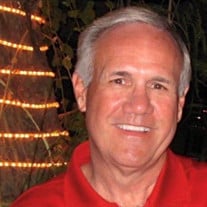 J. Kent Underwood, 74, of St. Louis, Missouri passed away peacefully on Saturday, May 9, 2020 after a lengthy battle with Parkinson’s/Dementia. He was born in Washington, DC on April 20, 1946, to Earl M. Underwood, Jr. and Louise (Creedle) Underwood. Kent grew up in Roanoke, Virginia during 1956 to 1968. He was an active member of Oakland Baptist Church and active in the Boy Scouts of America, attaining its highest honor of Eagle Scout. He attended William Fleming High School in 1959-1964 where he was an honor student; active in the SGA, serving as VP in 1963-64; was a member of the Colonel staff, Fleming’s yearbook, 1961-1964, Sports Editor 1963-1964; and active in sports at Fleming, letterman in Westling and Track & Field. While in high school, Kent met the love of his life, his future wife, Irene (Spangler). They were married in Roanoke, Virginia at Oakland Baptist Church on June 11, 1968. After graduating from high school in June 1964, he was employed by the Virginia Highway Department. That fall, Kent attended Virginia Military Institute where he was part of VMI’s NCAA Wrestling team. In 1968, he graduated from VMI and received a bachelor of science degree in Civil Engineering, with honors. Kent then obtained his master’s degree in Civil Engineering, Purdue University, 1972. Kent served for eight years in the U.S. Air Force, Andews Air Force Base, Maryland, 1968-1970, then was stationed in South Korea, 1970-1971. He completed his military service as captain, Randolph Air Force Base, San Antonio, Texas. After serving his country Kent joined the Monsanto Company in 1976. Over these years, Kent was manager of constructon management, 1993, before joining Solutia. Kent was active and influential in both The Business Roundtable Construction Committee and the Construction Industry Institute (CII), serving on its Board of Advisors. He twice was nominated as the ENR Man of the Year, recognizing him as a construction industry leader. CII also honored him as the first recipient of the Richard L. Tucker Leadership and Service Award. Kent was a member of the Executive Committee of the St. Louis Council of Construction Consumers and served as commissioner, vice chairman, then chairman of the St. Louis Regional Convention and Sports Complex Authority. He also had overall responsibility for oversight of design and construction with the St. Louis Stadium Authority in the building of the $300 million TWA Edward Jones Dome for the St. Louis Rams. Kent retired in 2002 with more than 33 years of service to the engineering, construction, and facilities management industries. He was a licensed Professional Engineer. Kent founded Underwood Consulting, LLC in 2001 and was active in consulting until 2015. In addition, Kent was licensed as a FAA Private Pilot and enjoyed flying his plane to many locations in the United States for over 20 years. Kent is survived by his sister Carol Underwood Digesare of Jacksonville, FL; two sons, Scott Underwood of St. Louis, MO and Jeff (Valerie) Underwood, Greeley, CO; two grandchildren; and two step-grandchildren. He was preceded in death by his parents and his wife, Irene. A private graveside service with military honors will be held. Memorial gifts can be made to the VMI Foundation, Inc., P.O. Box 932, Lexington, VA 24450-0932, or to a favorite organization/charity, if desired.

J. Kent Underwood, 74, of St. Louis, Missouri passed away peacefully on Saturday, May 9, 2020 after a lengthy battle with Parkinson&#8217;s/Dementia. He was born in Washington, DC on April 20, 1946, to Earl M. Underwood, Jr. and Louise (Creedle)... View Obituary & Service Information

The family of J. Kent Underwood created this Life Tributes page to make it easy to share your memories.

Send flowers to the Underwood family.