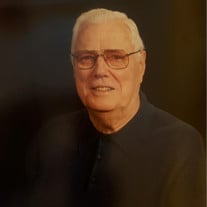 Bernward ‘Harold’ Juhle went to be with his Lord and Savior on Sunday, August 30, 2020, at the age of 85. He was born in Washington, DC on October 8, 1934, to German immigrants, the late Bernward and Elizabeth Juhle, and was raised on a farm in Charles County, MD. He served in the US Army and the Reserves for four years. He worked as a teacher, air traffic controller, and business man in Virginia and Florida. He is survived by his beloved wife of nearly 59 years, Phyllis Juhle; children, Krista Diane Garrett of Waldorf, MD, Margret Hope Journell and husband Steven Journell of Pearisburg, VA, and Carl Ray Juhle of Morehead City, NC; grandchildren, Caitlin Michelle and husband Barrett West of Waldorf, MD, Steven Ty Journell, and Carl Chase Journell both of Pearisburg; great-grandchildren, Molly Reese of MD, Lilah Betterton and Kane Betterton of Waldorf, MD; as well as his brother, Friedrich Juhle and wife Martha of Ferndale, WA. In addition to his parents, Harold was preceded in death by his granddaughter, Tara Nicole Reese; and brothers, Hans Bodo Juhle, and Werner Juhle. Visitation will be held at Riverview Baptist Church, Ripplemead, VA on Monday, September 7, 2020, from 5-7 p.m., with a Memorial Service to immediately follow at 7 p.m. A private family interment service will be held at a later date in the Southwest Virginia Veterans Cemetery, Dublin, VA. In lieu of flowers, please make donations to Riverview Baptist Church, in memory of Harold Juhle. The family is being served by Horne Funeral Home & Crematory, Christiansburg, VA.

The family of Harold Juhle created this Life Tributes page to make it easy to share your memories.

Bernward ‘Harold’ Juhle went to be with his Lord and Savior on...

Send flowers to the Juhle family.