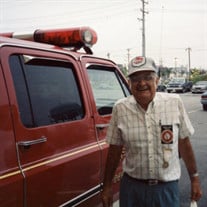 Harold David Akers, Sr, 88, of Christiansburg, passed away at home Tuesday, March 3, 2020. Retired from the United States Postal Service, he was an honorary member of the Christiansburg Fire Department and served in the Air Force. In over 30 years with the postal service, he worked on the railroad, in the downtown Christiansburg office and as a rural mail carrier. After his retirement, he served as a magistrate for Montgomery County. A life-long resident of Christiansburg, he was a member of the Christiansburg Fire Department for 46 years, serving as secretary-treasurer for 26 years. During his time in fire services, he served as the Secretary of the Virginia State Firefighters Association for 26 years and he was Past President of the Southwest Virginia Firefighters Association. He was also a member of the Christiansburg Hunting Club and the Montgomery County Game and Fish Club. He was preceded in death by his parents George L. (Fess) and Blanche Myers Akers; his wife Eulene Wilson Akers; his mother-in-law Hilda B. Wilson, his brother Freddie L. Akers; his step-daughter Debra Myers, and step-son John Keith Midkiff. Survivors include wife Barbara Midkiff Akers; daughter Martha Lynn Akers; son (Harold) David Akers, Jr.; daughter-in-law Debbie Price Akers, grandson Tanner Akers; step-son Eddie Midkiff, his wife Vicki, granddaughter Tracy Litton; grandson G. E. Midkiff; four great-grandchildren; sister Janice Akers Jones; brother (L. J.) Jack Akers; sister-in-law Martha G. Akers; nieces and nephews Cindy Porterfield Hawley, Barry Akers, Lori Jones Parry, Laura Ellen Via, and his caregivers who cared and comforted him as family, Mary Kilby, Ann Mills, and Happy Tolbert. The family will receive friends at Horne’s Funeral Home in Christiansburg, Virginia, from 1 – 2 p.m., Saturday, March 7, 2020. The service is at Horne’s at 2 p.m., followed by the burial at Sunset Cemetery, in Christiansburg. In lieu of flowers, the family requests that contributions be made to the Christiansburg Fire Department, 110 Depot Street, Christiansburg, Virginia 24073 or Hospice of New River Valley, 701 Randolph Street, Radford, VA, 24142.

Harold David Akers, Sr, 88, of Christiansburg, passed away at home Tuesday, March 3, 2020. Retired from the United States Postal Service, he was an honorary member of the Christiansburg Fire Department and served in the Air Force. In over 30... View Obituary & Service Information

The family of Harold David Akers Sr created this Life Tributes page to make it easy to share your memories.

Harold David Akers, Sr, 88, of Christiansburg, passed away at...

Send flowers to the Akers family.