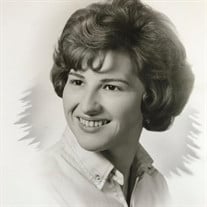 Evelyn Mae Powers Melia of Blacksburg, VA, was born August 12, 1941 to the late Frederick and Lena Powers. She passed away September 2, 2020. Services will be live streamed by St. Jude Catholic Church, Radford, VA, via their Facebook page at noon on September 11, 2020. A replay will be available through the same page. In lieu of flowers, please consider a monetary or blanket donation to Project Linus. You may also consider beautifying an outdoor space, either in your own yard or elsewhere in her honor. In addition to her parents, she was predeceased by her grandson Ryan Wade Welborn. Project Linus Local New River Valley Chapter, http://nrvprojectlinus.org Project Linus National Organization, https://www.projectlinus.org/ St. Jude Catholic Church, Radford, VA, http://www.stjuderadfordva.org/, Facebook https://www.facebook.com/StJudeCatholicChurch Evelyn was born in Glens Falls, NY, the fifth of ten children, David Powers, Stephen Powers, Marianne Powers, Joan Bowen, Carol Manion, Patrick Powers, Michael Powers, Allen Powers, and Kathleen Goudy. She attended St. Mary’s Catholic Academy in Glens Falls, NY and graduated in 1959. She joined National Airlines and worked in reservations in New York before moving to Miami, Florida. On a blind date in 1963, she met the love of her life, Donald Melia and they were married in Glens Falls on October 3rd, 1964. They had four children together: twins Theresa Welborn Potter and Tina Bilodeau, Maureen Sroufe, and Dominic Melia who gave her ten grandchildren and, in turn, three great-grandchildren. Don took her on many adventures around the world as they lived in Japan where Tina and Terri were born and then Southern California where Maureen and Dominic were born. The whole crew moved to Northern Virginia and then to Virginia Beach following Don’s naval career. In 2002, Evelyn moved to Blacksburg to be in the beautiful mountains and close to her daughter Maureen, with Don joining her after retirement in 2004. She loved doing puzzles, playing Scrabble, and was always up for a game of cards. Throughout her life she always had a passion for helping others. She was an active volunteer in many of the kid’s activities such as Girl Scouts, Cub Scouts, Catechism teacher, Band Mom, and more. Once the crew had all jumped ship and it was just the Captain and First Mate (you decide who is who), she kept active in organizations and helped to babysit many children including Sara Duncan-Patchin, Christianna and Nicholas Tottossy, and Emma, Mitchell, and Benjamin Sroufe. She loved gardening, especially roses, which didn’t love the mountain weather, so she found other plants to keep her busy. She ran a refuge for dying plants and brought many back to life in her sun room. She became a certified Master Gardener in 2005 and worked on many projects in the New River Valley. One of her favorites was the ”Farmacy Garden”, where members of the community who qualify for supplemental nutrition assistance programs can volunteer and get fresh produce. She even earned the “2000 Volunteer Hours” honor as a Master Gardener. She was an avid bowler, being on many teams throughout her life. She always said that was one of the constants no matter where they went. Whenever they moved, she found a church and then a bowling league, everything else would follow. She was active at church as a eucharistic minister and with the Women’s Group. She volunteered her time to so many organizations, using her crafting talents of sewing, crocheting, and knitting to make items for those who needed them. One of her most notable was working with Angel Gowns, making burial gowns for preemies and still born babies. She would always crochet an angel or butterfly to stitch on the shoulder to take them to heaven. Another group she loved to help with, especially in her last years, was Project Linus. She was an active Blanketeer until the end, donating over 120 blankets to her local chapter in the New River Valley. She loved sharing her knowledge with her grandchildren and took them on many adventures to learn about the world. She will be missed dearly by her family, and many, many friends.

Evelyn Mae Powers Melia of Blacksburg, VA, was born August 12, 1941 to the late Frederick and Lena Powers. She passed away September 2, 2020. Services will be live streamed by St. Jude Catholic Church, Radford, VA, via their Facebook page at... View Obituary & Service Information

The family of Evelyn Mae Powers Melia created this Life Tributes page to make it easy to share your memories.

Send flowers to the Melia family.