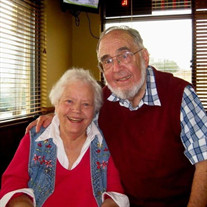 Eugene “Gene” Periman, 87, died on February, 12, 2021 at Kroonje Nursing Home. He was born on February 16, 1933. He grew up on a cattle ranch in the Dolores River Valley. He met Barbara Dana at the University of Colorado and they just recently celebrated their 63rd anniversary on October 26. He moved to Virginia where he continued his education and received his Doctorate in Statistics from Virginia Tech. He retired from the Radford Army Ammunition Plant where he worked for Hercules and assisted in the automaton of the manufacturing of gunpowder. Gene sang tenor in the choir of the Blacksburg United Methodist Church, where he was the Distinguished Toastmaster and Governor of District 66. He was a very loving husband, father, and grandfather. He enjoyed playing video games on his computer and on other devices, working a rubric’s cube, as well as puzzles. He is preceded in death by his parents, Reuben and Newel Periman. He is survived by his wife, Barbara Ann Periman; brother, Mickey (Joyce) Periman; children, Cathy (Rick) Tuck, David (Teresa) Periman; grandchildren, Chris (Christie) Tuck, Michael (Kelley) Tuck, Stephen Tuck, Angela (Paul) Chumpitaz, Tony (Chelsea) Periman, Brian (Micah) Periman, Kevin (Amanda) Periman, Melissa (Glenn) Byron; great-grandchildren, Travis and Ryan Gauldin, Miranda, Libby, Bekah, Hannah and Abby Tuck, Maria Periman, Joseph Perino, and Matthew, Erin and Addison Periman; great-great-grandchildren, Jaxon and Landon Gauldin. There will be a family only visitation on Monday, February 15, 2021 from 1-2 p.m. at Horne Funeral Home. Public visitation will be held on Monday, February 15, 2021 from 2-3 p.m. at Horne Funeral Home, 1300 North Franklin St. Funeral Services will be held on Tuesday, February 16, 2021 at 1:00 p.m. at the Horne Funeral Home chapel. Interment will follow at Sunset Cemetery with a brief graveside service. The funeral service for Eugene can be viewed via the link below on Tuesday, February 16, 2021 beginning at 1:00 p.m. https://www.facebook.com/horne.horne.739326/

The family of Eugene "Gene" Periman created this Life Tributes page to make it easy to share your memories.

Send flowers to the Periman family.