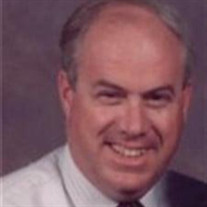 Edward J. Trump, Jr., 67, of Christiansburg, VA went to be with the Lord on Tuesday, January 11, 2022. He was born in Christiansburg on August 29, 1954. He was preceded in death by his father, Edward J. Trump, Sr., his grandmother Molly McGuyer, his special mentor Hubert Horne and a special friend Kay Young. Eddie is survived by his wife of 46 years, Paulette Trump; his children, Bobby (April) Trump and Devin Trump; grandson, Guy Trump; mother, Jean Trump; siblings: Kathy Harvey, Debbie Akers, Shelby (Donald) Main, Jerry (Sue Williams) Trump; special family and caretaker, Jennifer Zimmerman; special niece, Brittany (Michael) Lee; numerous nieces , nephews, and great nieces; special family: Angelia (Paul) Savel, Nikki Partin, Josh Savel, Matthew(Cat) Hauschildt, and Taylor (Aaron) Lusk; special friend, Dickie Horne; faithful companion, Cassie, and numerous other family and friends. Eddie was employed to work at Sunset Cemetery in Christiansburg by Hubert Horne in the summer of 1971. Shortly after he was hired as an employee of the then Richardson-Horne Funeral Home in October of 1971. Eddie earned his funeral director's license and embalmer's license and graduated from the Cincinnati College of Embalming in 1975. Hubert Horne purchased the remaining Richardson stock in 1972, and in 1987 he and his son, Dick, gifted several shares of stock of the funeral home to Eddie. In 1996 he was made Vice President of the firm; a position he held until March 31, 2014. In 2013 Eddie, a diabetic, suffered the first of several strokes and soon became unable to work. He retired on March 31, 2014. Eddie was a member of Christiansburg Rescue Squad from 1975 to 2013. During his service, longest active running member and achieved his Life Membership. The family will receive friends on Saturday, January 15, 2022 from 3:00 until 5:00 pm at Horne Funeral Home. The funeral service will be held on Tuesday, January 18, 2022 at 11:00 am from the chapel of Horne Funeral Home with Pastor Myron Powell officiating. Interment will be in Sunset Cemetery. The family requests in lieu of flowers, memorial donations be made to the Christiansburg Rescue Squad.

The family of Edward Jackson 'Eddie' Trump Jr. created this Life Tributes page to make it easy to share your memories.

Send flowers to the Trump family.