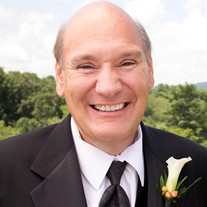 On Sunday, November 17, 2019, Rev. Earl Douglas Hanks, age 61, was called home from his earthly journey and was received into the loving arms of his Lord and Savior, Jesus Christ. He was born on January 16, 1958, in Pulaski, VA to the late Robert and Alma Hanks. He married his soulmate and best friend, Judy Smithson Hanks, in 1981. He loved muscle cars and good music. He spent much of his life singing and playing guitar. Earl loved Southern Gospel and was even known to impersonate Elvis Presley from time to time. Earl sang in two gospel groups; Singspirations and Sounds of Praise. Earl was a graduate of Pulaski County High School in Virginia and went on to get a Bachelor’s Degree in Theology at the Christian Life School of Theology. Earl always took the Gospel message very seriously, as it was impressed on him at an early age. He took God’s calling and became licensed in 1984 and ordained in 1986 as a minister in the International Pentecostal Holiness Church. He served faithfully as a bi-vocational pastor at Backcreek Holiness Church, evangelist, then fulltime pastor for Baker’s Chapel Pentecostal Holiness Church, Trindale Community Church, and Abundant Life Fellowship over the span of 40 years. Among his greatest achievements are his two children, Phillip Douglas Hanks, and Krista Nicole Justice. He would be the first to tell you that next to the Lord, Judy, and his two children, his greatest pride and joy were his grandchildren, Ethan Zachary Hanks, Elijah Garret Hanks, and Ellenor Joy Justice, who called him Pawpaw. He was truly a selfless individual, and he considered each day a gift from God. He saw his time here on earth as a mission field and considered his trials and tribulations nothing compared to the hardships of those around him. Even while suffering from cancer during his final years on earth, he never complained and went out of his way to make sure those around him were happy. Earl never became lured by material things, but saw them as a gift from God, a means to advance the Kingdom and share Christ’s eternal love. From a simple smile or hug, a handshake, a listening ear or a shared prayer, Earl had a gift of relating to others. He never met a stranger. Among the many verses of the Bible, none is more fitting for Earl than these words from Jesus, “Well done, good and faithful servant! You have been faithful with a few things; I will put you in charge of many things. Come and share your master's happiness!” (Matthew 25:21). We know that Earl is sharing that happiness now. Earl will be missed by his loving wife Judy Smithson Hanks of Summerfield, NC; his son and daughter-in-law, Phillip and Diane Hanks and their sons Ethan and Elijah Hanks of Oak Ridge, NC; his daughter and son-in-law, Krista and Joseph Justice and their daughter Ellenor Justice of Kernersville, NC; his four brothers Jerry and Sharon Hanks of Harrisburg, PA; Keith (Happy) and Dayna Hanks of Radford, VA; Dennis and Rene Hanks of Pulaski, VA; and Timmy and Missy Hanks of Pulaski, VA; mother-in-law Beatrice Smithson (who called Earl “Her Golden Boy”) of Lindside, WV; sister-in-laws Martha and Tommy Booth of Lindside, WV, Ruth Highlander of Fairlea, WV; brother-in-law Danny and Shirley Smithson of Lindside, WV; special cousin Marlene and Don Farlow of High Point, NC; and many nieces and nephews. Earl was preceded to the Heavenly Kingdom by his father and mother Robert and Alma Hanks, father-in-law Rev. Ralph L. Smithson, and brother-in-law Timmy Smithson. Visitation will be held on Friday, November 22, from 5:00 pm to 8:00 pm at Horne Funeral Home in Christiansburg, VA. A funeral service will be held on Saturday, November 23, at 11:00 am at Abundant Life Fellowship in Pilot, VA. Visitation will be held on Sunday, November 24, from 1:00 pm to 3:00 p.m. at Oak Ridge United Methodist Church in Oak Ridge, NC, followed by a funeral service at 3:00 p.m. with burial immediately following.

On Sunday, November 17, 2019, Rev. Earl Douglas Hanks, age 61, was called home from his earthly journey and was received into the loving arms of his Lord and Savior, Jesus Christ. He was born on January 16, 1958, in Pulaski, VA to the late Robert... View Obituary & Service Information

The family of Earl Douglas Hanks created this Life Tributes page to make it easy to share your memories.

Send flowers to the Hanks family.