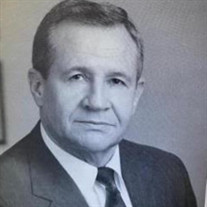 E. Carlton Bowyer, Ph.D. It is with great sadness we announce the passing of Carlton Bowyer, 86, who went to be with his Lord and Savior on May 23, 2020. Carlton was born in Christiansburg, Virginia on May 31, 1933. He is pre-deceased by his mother, Eula Reynolds and her husband, Reverend Scott Reynolds of Roanoke, Virginia; his grandparents, Guy and Zora Akers of Christiansburg, Virginia; three aunts and their husbands: Nellie and Dale Sprowl, Ruby and James Booth and Glenna and Clyde Kramer and their son Bruce, all of Christiansburg, Virginia. Carlton is survived by his wife, Tammy Bowyer, of 46 years; his son, Barry Carlton Bowyer, his wife Christina Joy Bowyer, granddaughter, Madison Brie Bowyer, all of Virginia Beach, Virginia; and daughter, Mary-Margaret Monk of Naples, Florida. Carlton’s life and education focused on athletics and academics. He attended Christiansburg High School where he was an excellent student, a talented athlete and popular “Deacon” running back. He proudly received an athletic monogram for football, basketball and baseball. Teachers, students and the local newspaper continually raved about his skills and talents as a star football player to the delight of his dear mother, aunts and uncles. As a graduating senior and class president he was named “Mr. Touchdown, U.S.A.” and voted “Best Physique” by the graduating class. Before college he spent two years with the Army’s 101st Airborne Division, the “Screaming Eagles,” where he played on the Fort Monmouth “Signaleers” football team and was named to the All Opponent Football Team, Quantico Marines National Service Champions. Carlton went on to attend Wofford College in Spartanburg, South Carolina on an athletic and academic scholarship, becoming a college letterman. During his college career, he was named to Who’s Who in American Colleges and Universities and was nominated for a Fulbright Scholarship and a Woodrow Wilson Fellowship. In 1960, he graduated 11th in a class of 167 with a bachelor’s degree in psychology and education. Carlton continued his education by earning his Master of Science, Certificate of Advanced Study and Doctor of Philosophy (Ph.D.) from Old Dominion University. In 1960, Carlton came to Virginia Beach to be a teacher and head football coach at the former Virginia Beach High School. With his competitive spirit and drive, he expected only the best from his players. Soon the Seahawks became the Eastern District Champions and Coach Bowyer was named Coach of the Year. To this day, many of his players relive the challenges and the life-changing experiences credited to their coach. Likewise, he cherished the memorable association with all the students and players he taught and coached. Continuing his long and distinguished career with Virginia Beach City Public Schools (VBCPS), Carlton was appointed to Assistant Principal of First Colonial High School followed by appointments to Principal of First Colonial High School, Director of Program Administration, Assistant Superintendent of Operational Services, Associate Superintendent and Superintendent of VBCPS. In every position, he provided leadership, insight, innovation, and cost-saving measures. His administrative positions included heading all areas of instruction and instructional personnel to building schools at a square cost that was less than the state average and less than any other Virginia school district. He exhibited exemplary leadership throughout his career including involvement with many committees and boards. Some of these included Chairman of the Secondary School Principals, sitting on the Board of Directors of Cape Henry Collegiate, Chairman for the Standards of Quality Formulation Committee, Chairman of the State Principals Group AAA Board, Chairman of the Formulation of Minimum Competency Tests (which resulted in the State Department of Education adopting the VBCPS math competency test), appointment by Governor Charles S. Robb to the Virginia Beach Financial Committee, Board of Directors for the Virginia Beach Historical Maritime Museum, President of the Fraternal Order of Public Safety, Virginia’s Director to the Council of Educational Facility Planners International, appointment to the Governor’s Educational Block Grant Advisory Committee for the State of Virginia by Governor Gerald Baliles, membership in the Virginia Beach Rotary Club and many more too numerous to mention. Enjoying his passion for football and following the careers of admired friends who were football coaches provided many enjoyable years of traveling to various universities. Football weekends with cherished friends were the highlight of Carlton’s fall. Some of his favorite times included exciting games at Appalachian State University, the University of South Carolina, the University of North Carolina and the Air Force Academy. While visiting the Air Force Academy in Colorado Springs, Colorado, Carlton discovered The Broadmoor and returned to this renowned resort hotel annually for twenty-six years. Here, too, he cultivated many wonderful and lasting friendships. Besides his passion for football, “making reservations for dinner” was one of Carlton’s favorite things. Most often he dined at the Isle of Capri where he thoroughly enjoyed many treasured friendships. Most of all, Carlton was a friend indeed and went far and beyond to help others throughout his lifetime. He was admired for being a man of the highest integrity who never compromised his beliefs. A private family graveside service is planned with Horne Funeral Home in Christiansburg, Virginia, officiated by Pastor Jessie Howard. Memorial donations in honor of Carlton may be made to the Mason Cove Chapel, c/o Judy Luper, 3421 Bradshaw Road, Salem, Virginia 24153. A gathering of friends and family will take place this fall at H.D. Oliver Funeral Apts., Laskin Road location. Online condolences, fond memories and funny stories may be shared with the family at hdoliver.com.

E. Carlton Bowyer, Ph.D. It is with great sadness we announce the passing of Carlton Bowyer, 86, who went to be with his Lord and Savior on May 23, 2020. Carlton was born in Christiansburg, Virginia on May 31, 1933. He... View Obituary & Service Information

The family of E. Carlton Bowyer Ph.D. created this Life Tributes page to make it easy to share your memories.

It is with great sadness we announce...

Send flowers to the Bowyer family.