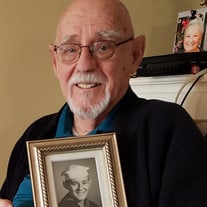 Clarence Waldo Taylor Jr. M.D., 92 of Shawsville, Va. passed away on Thursday ,April 25, 2019 surrounded by the love and support of his family. Born August 10, 1926, he was the only son of Rev. Clarence W. Taylor, Sr. and Mrs. Gertrude Snodgrass Taylor. He was preceded in death by his wife of 63 years, Ora Lee Flanagan Taylor. Clarence served in the United States Navy during World War II as a Pharmacist’s Mate 3rd Class, earned degrees from Emory and Henry College and Medical College of Virginia, and completed his training with a residency at UNC Chapel Hill. Clarence’s life changed forever when he married Ora on June 20th, 1947 in Farmville N.C. Clarence and Ora made Shawsville, VA their home on July 4th, 1957. Clarence, along with his partner Dr. G.R. Smith, Jr. established a thriving family practice clinic in Shawsville, VA which is still serving the needs of the community today. While his calling was medicine, he took great pride in raising his children, Michael David Taylor (September 8, 1956), Clarence Flanagan “Butch” Taylor (April 13, 1961), Leigh Anne Taylor (May 21, 1962) and John Andrew Taylor, (March 29, 1967). Clarence is survived by Mike, his wife Kat and his son Mickey, his wife Robyn and their two daughters Alexandria and Lauryn; Butch and his three sons, Sam, Jake, and Ben, and their mother Ruth; Leigh Anne, her husband Hugh, and her children Emma and Taylor, and their father Joe; John, his wife Donna and their three children, Leah, Andrea, and David, sixteen grandchildren, 11 great grandchildren and 2 great-great grandchildren. Memorial visitation at Horne Funeral Home in Christiansburg, VA Friday May 3, from 5 pm to 8 pm. The funeral will be held at White Memorial United Methodist Church in Shawsville, VA, Saturday May 4 at 11 am. He will be interred at Knollkreg Memorial Park in Abingdon VA at 3:30 pm. In lieu of flowers, memorial gifts may be given to White Memorial United Methodist Church, 4073 Old Town Road, Shawsville VA, 24162.

Clarence Waldo Taylor Jr. M.D., 92 of Shawsville, Va. passed away on Thursday ,April 25, 2019 surrounded by the love and support of his family. Born August 10, 1926, he was the only son of Rev. Clarence W. Taylor, Sr. and Mrs. Gertrude... View Obituary & Service Information

The family of Dr. Clarence W. Taylor created this Life Tributes page to make it easy to share your memories.

Send flowers to the Taylor family.