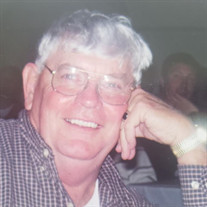 Charlie Surface Costigan, Jr., 79, of Christiansburg, was promoted to glory on August 12, 2021. Charlie was a caring husband, father, grandfather, brother and friend. He retired from the Radford Army Ammunition Plant after 38 years of service, and was a faithful member of Bible Baptist Church. Charlie's favorite thing to do was play with and spoil his two beloved granddaughters, who were the apple of his eye. He loved gardening, especially watching his tomatoes grow. He also really enjoyed watching the trains pass behind his house – the 611 was his favorite train that he rode as a young boy. Charlie was a friend to all, and could put a smile on your face with his funny jokes and stories, like only he could do. Charlie was preceded in death by his first wife and mother of his children, Neva Collins Costigan; his parents, Charlie Surface Costigan Sr. and Pauline Gibson Costigan; and his sister, Loretta Costigan Musselman. He is survived by his wife, Frannie McDaniel Costigan; daughters and sons in-law, Julie Costigan Farmer, Paula Costigan Rutherford (Jim), Penny Costigan Hall (Scott); granddaughters, Lyndsey Neva Rutherford and Katelyn Mae Rutherford; and many nieces, nephews and special friends. All services will be held outdoors, with Pastor Kenneth Wells officiating. Visitation will be on Monday, August 16, 2021, from 6-8 p.m. at Horne Funeral Home. Funeral Services will be held on Tuesday, August 17, 2021, at 11 a.m. at Horne Funeral Home, with interment to follow at Roselawn Memorial Gardens The funeral service will be available to watch live at the following link: https://www.facebook.com/horne.horne.739326

Charlie Surface Costigan, Jr., 79, of Christiansburg, was promoted to glory on August 12, 2021. Charlie was a caring husband, father, grandfather, brother and friend. He retired from the Radford Army Ammunition Plant after 38 years of service,... View Obituary & Service Information

The family of Charlie Surface Costigan Jr. created this Life Tributes page to make it easy to share your memories.

Send flowers to the Costigan family.