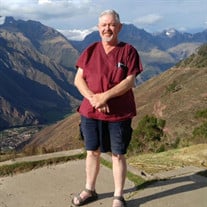 Charles Allen Teaters, Jr. (aka “Charlie,” “the Chief,” “the Big Dog,” ...) was born in Chilhowie, VA on July 26, 1952 to Charles Allen Teaters, Sr. and Carolyn Daly Teaters. Charlie is preceded in death by his father and nephew Luke Teaters and is survived by his spouse Carol Neely Ballard, his mother, his two brothers Ralph Nelson Teaters and William Stanley Teaters, his three children Charles Houston Teaters (wife Jodie), Jessica Martin (husband David), and Lindsey Staubach (husband Carl), his six grandsons Eli, Nate, Everett, Ben, Harry, and Cam, and his nephews Brian, Aaron, and Preston. Charlie graduated from Virginia Tech in 1975 and later graduated from the Medical College of Virginia in 1979 as a Medical Doctor. A self-made man, he put himself through school by working multiple jobs. Charlie went on to work as the head of the Princeton Community Hospital Emergency Department for nearly 20 years. He finished his career working as an Emergency Department physician with Carilion in Roanoke, VA for almost a decade. Charlie remained an avid Hokie supporter and benefactor until his last day. He was intensely proud that two of his children attended his alma mater. He frequented football games and alumni events, usually with his great friend Joe Turley, and was a member of the Ut Prosim Society. Anyone who knew Charlie knew that he was a captivating story-teller. He also enjoyed traveling the world with Carol by his side, fishing, old Westerns, providing for his family, and his beloved dog Dexter who was always by his side/on his lap. Charlie passed away on May 30, 2021. He will be dearly missed by all who knew him.

The family of Charles Allen 'Charlie' Teaters created this Life Tributes page to make it easy to share your memories.

Send flowers to the Teaters family.