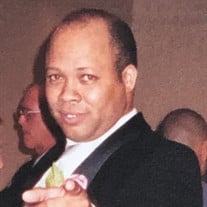 In Loving Memory of Charles Stephen Craggett Born: February 20, 1969 – Died: August 29, 2020 Memorial Service by means of Zoom Saturday, September 12, 2020 at 2:00 p.m. Contact Family Members for Zoom Link OBITUARY Charles Stephen Craggett, affectionately known as “Stevie” by family and friends, passed away on Saturday, August 29, 2020 at his home. He was the youngest son of the late Leonard N. Sr. and Bernice P. Craggett, both of Elliston VA. He is survived by two brothers – Leonard N. Craggett Jr. (Bertha) and Jeffrey T. Craggett (Trisha), both of Elliston, VA. He is also survived by his nephews: Aaron N. Craggett (Christian) of Floyd VA, Isaiah M. Craggett of Elliston, VA; Nieces: Ashley M. Taylor (Robert) of West Chester OH, Aliver’ N. Harrell of Radford VA, Mia C. Craggett of Elliston, VA. Also, special relatives include Betty, Erika and Marcia Price of Christiansburg, VA, John and Regina Spinner of Lynchburg, VA, a host of Special Aunts, Uncles, Cousins, Great Nephews and Nieces, Friends, and Fairfield Inn Co-workers. Stevie was a quiet person who observed everything around him. In fact, family often teasingly called him, “Eagle Eyes” because he often saw you before you saw him. Although quiet, he loved to tease his family, friends and co-workers constantly. He was known to tap you on one shoulder to make you look, and then show up on the other side and mischievously smile and say “Hi” and then break out into a laugh until he cried. That teasing carried over into his special relationship with his mother, Bernice. He picked after her constantly until she finally said, “Stop it Stevie!!” in a way only Bernice could do. When she passed away, he missed her terribly. Stevie was a hard worker. For over 20 years he skillfully worked side-by-side with his brother Jeff, installing carpet and tile for homeowners and businesses. And for the last 3 years he worked at the Fairfield Inn as a maintenance worker or as he would say, “A Maintenance Engineer”, where he was affectionately known as “Harvey”. His interest included riding his motorcycle, tinkering with his tractors and traveling with family and friends. Stevie became a dedicated servant of Jehovah God, in June of 1995. In the Christiansburg congregation of Jehovah’s Witnesses, he diligently carried out his responsibilities as a Ministerial Servant. He was always at the Kingdom Hall early to greet the friends and assist them in whatever they needed, and always with a smile. In addition, he volunteered his time and energy on the Regional Building Committee, helping to build and remodel Kingdom Halls, in the state of Virginia. Stevie will be deeply missed. But, his hope was to live in a righteous new world, where there will be no more sickness, death or pain as is mentioned at Revelation 21:3,4 . We look forward to seeing him in perfect health, along with many other family members and friends who have died.

The family of Charles Stephen Craggett created this Life Tributes page to make it easy to share your memories.

Send flowers to the Craggett family.