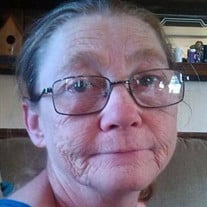 Cathie Susan Fowler, 60, of Radford, passed away at her home with her family and best friend at her side on July 2, 2020, after a long struggle with cancer. She was preceded in death by her parents, Hubert &#8216;Bulldog&#8217; Montgomery &... View Obituary & Service Information

The family of Cathie Susan Fowler created this Life Tributes page to make it easy to share your memories.

Cathie Susan Fowler, 60, of Radford, passed away at her home...

Send flowers to the Fowler family.