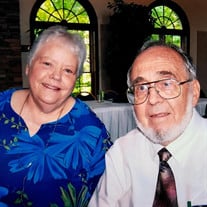 BLACKSBURG: Barbara Periman, 85, was born on April 20, 1936 and died on April 24, 2021 at Kroontje Nursing Home. She was preceded in death by the one true love of her life, Eugene Periman, her husband of 63 years. Barbara and Eugene met at the University of Colorado in Boulder where they hung out at the Wesley Foundation. Their relationship grew and they married on Oct 26th, 1957 in Denver and honeymooned in Colorado Springs at Grandma Effie’s cabin. Of course, Mickey, Eugene’s brother, woke them up playing trumpet first thing in the morning. Eugene got a job working for Dupont and they transferred to Wilmington Delaware where Barbara gave birth to Cathleen. Eugene then got a job with Hercules and moved to Salt Lake, Utah, where Barbara gave birth to David. Eugene transferred to Radford Virginia and they bought a house in Christiansburg, where they raised their children. Once her children were teenagers, Barbara went back to college and attended Radford University where she majored in music and voice. Growing up, her kids often heard her singing bits and pieces of a diverse assortment of music. Barbara was proficient on the piano and offered to accompany herself at her own graduation recital. She taught piano lessons and sang solos at Blacksburg Methodist Church. As they grew older, Barbara and Eugene moved to Warm Hearth where they were inseparable, even though they lived in separate wings. During COVID they kept in touch by walkie talkie and sneak visits. “The two of you always seemed inseparable wherever you were seen, you were always together.” Mr. Belva Collins Barbara is survived by her children Cathy (Rick) Tuck; David (Teresa) Periman; her grandchildren Chris (Christie) Tuck, Michael (Kelley) Tuck, Stephen Tuck, Angela (Paul) Chumpitaz, Tony (Chelsea) Periman, Brian (Micah) Periman, Kevin (Amanda) Periman, Melissa (Glenn) Bryon, her great grandchildren Travis Gauldin, Ryan Gauldin, Miranda, Elizabeth, Rebekah, Hannah, and Abigail Tuck, Maria Periman, Joseph Perino, Matthew, Erin and Addison Periman, and her great great grandchildren Jaxon and Landon Gauldin. Barbara is preceded in death by her parents Charles and Josephine Dana, and her brothers Charles and Kent. The visitation will be at 1pm and the funeral at 2pm on Monday, Apr 26th at Horne Funeral Home, 1300 N Franklin St, Christiansburg, VA 24073. The funeral will be live streamed on Facebook. There will be a brief graveside service at Sunset Cemetery in Christiansburg.

BLACKSBURG: Barbara Periman, 85, was born on April 20, 1936 and died on April 24, 2021 at Kroontje Nursing Home. She was preceded in death by the one true love of her life, Eugene Periman, her husband of 63 years. Barbara and Eugene met at... View Obituary & Service Information

The family of Barbara Periman created this Life Tributes page to make it easy to share your memories.

Send flowers to the Periman family.