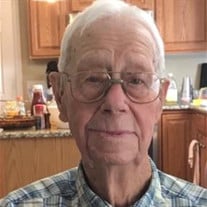 Alonza "Preacher" Hardy, Jr - June 3, 1919-October 21, 2019 Preacher was born in Nelson County, VA on June 3, 1919. He was the 3rd child of 9 born to Alonza Sr and Mildred Hardy. He grew up in various locations across the state of Virginia. Upon hearing about the bombing of Pearl Harbor he immediately reported to the local recruiting office and said "sign me up". He proudly served as a member of the Army Air Corp. Following his military service he settled in Grundy, VA where he worked for Appalachian Power Company for 35 years. Upon retirement he moved to Christiansburg to be near his daughter and her family. He was a member of the American Legion, Post 59, the VFW, post 5311, Christiansburg Masonic Lodge, and Grace Life Baptist Church. In addition to his parents, Preacher was preceded in death by his wife of 55 years, Syble; a daughter, Ellen Dawson; sisters, Mary Brown, Frances Clarke, and Ruth Richardson; and brothers, Jesse, Tom, C.D. and Leroy Hardy. Left to cherish his memory is his son-in-law and wife, Kenneth and Judy Dawson of Riner; granddaughters and husbands, Kathy and Mike Smith of Christiansburg and Angie and J.P. Murrell of Jefferson, GA; great-grandchildren Kenna and Natalie Smith and Meredith and Knox Murrell; sister, Fern Stapleton of Kingsport, TN; and several nieces, nephews and their families. Visitation will be Thursday, October 24 at Horne Funeral Home from 4-7. Funeral will be held Friday, October 25 at Horne Funeral Home at 10 with graveside to follow at 2:30 at Greenhills Memorial Gardens in Claypool Hill, VA.

The family of Alonza 'Preacher' Hardy Jr. created this Life Tributes page to make it easy to share your memories.

Send flowers to the Hardy family.